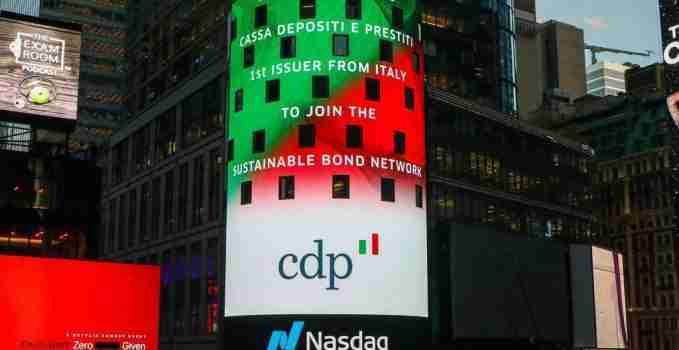 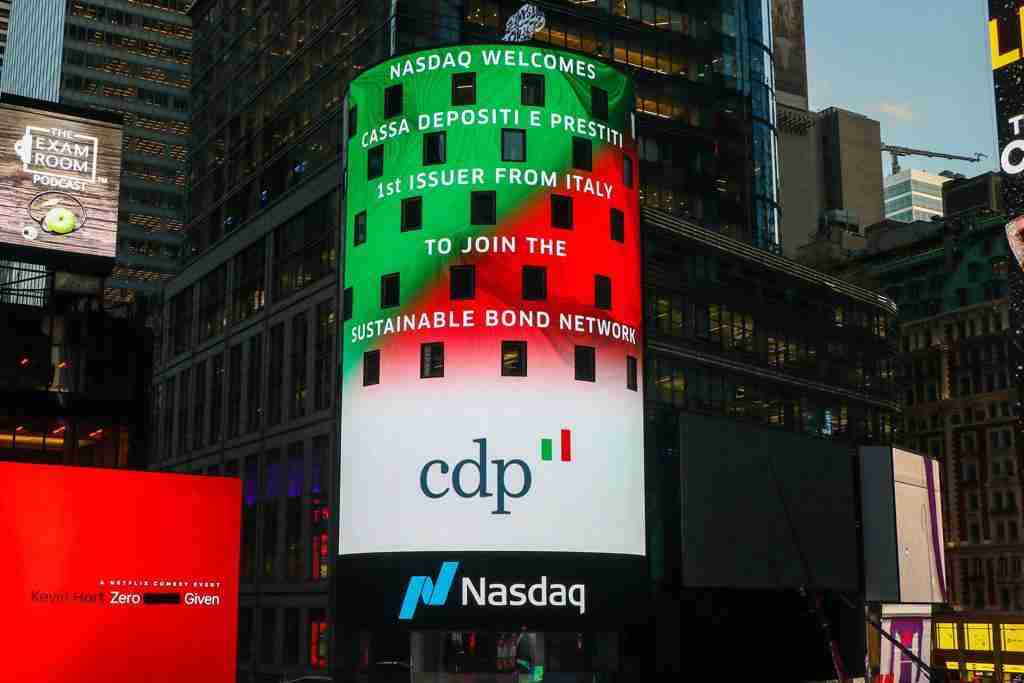 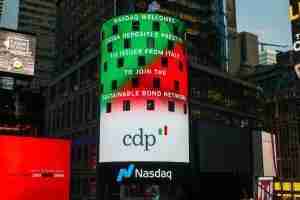 Cassa Depositi e Prestiti is the first Italian financial institution to join the Nasdaq Sustainable Bond Network, the platform managed by Nasdaq dedicated to sustainable finance, which brings together investors, issuers, investment banks and expert organisations.
To celebrate joining the network – marking the conclusion of Cassa Depositi e Prestiti’s 170th anniversary celebrations – the tricolour logo of the Company led by Fabrizio Palermo as CEO and Giovanni Gorno Tempini as Chairman, was showcased on the Nasdaq Tower in Times Square in New York City.

By joining the network, Cassa Depositi e Prestiti will be able to further expand its reach to potential investors worldwide, focusing particularly on Socially Responsible Investors.  CDP has aligned its strategic approach to the principles of Sustainable Development to contribute to achieving the 17 Goals of the United Nations 2030 Agenda through its daily actions.

The Platform provides standardised financial information and data concerning the impacts on the Sustainable Development Goals of the issuing companies.The initiative confirms CDP’s role as Italy’s leader in sustainable finance. CDP first entered the sustainable bond market in 2017 when it issued social sustainable bonds dedicated to having a real impact on the country. Between 2017 and 2020, CDP issued 6 sustainable bonds worth over 4 billion euro, making it one of the main social issuers in Europe.

These bonds have allowed CDP to reach an increasingly wide range of investors whilst simultaneously appealing to the so-called Socially Responsible Investors, who are particularly focused on investments that not only generate financial returns but also social and environmental added value.

The Chief Executive Officer of CDP Fabrizio Palermo stated: “The Nasdaq Tower was covered with the Italian tricolour. At the conclusion of the 170th anniversary celebrations, the CDP logo was showcased in Times Square to welcome it to the Nasdaq Sustainable Bond Network. CDP will be the first Italian issuer to join the international network, confirming the prominent role the institution has assumed over the last three years, including in international markets. It also attests to the validity of the strategy adopted in the 2019-2021 Business Plan, which is based on sustainability principles that translate into a positive impact for businesses and the country”.

CDP’s sustainable bonds
Between 2017 and 2020, CDP issued 6 ESG bonds worth over 4 billion euro, making it one of the main social issuers in Europe:
 in 2020, CDP issued the first Social Housing Bond worth 750 million euro. The funds raised will support the building of social housing, with initiatives dedicated to the most vulnerable segment of the population that is not eligible for Public Residential Housing, and yet is unable to fulfil its housing needs through the market for financial reasons or because of inadequate supply;
 in 2020, CDP issued the COVID-19 Social Response Bond worth one billion euro to support Italian businesses and local governments hard hit by the Coronavirus emergency. The bond proceeds were used to finance short-term initiatives to deal with the emergency in the immediate and medium-long term to support a subsequent economic recovery. With this bond, CDP became the first National Promotional Institution in Europe and the first Italian issuer to issue a COVID-19 Social Response Bond aligned with ICMA principles;
 in 2020, CDP issued a new 750 million euro social bond to support Italian companies investing in research, development and innovation and those hit hard by the COVID-19 emergency, with the aim of sustaining future growth and employment;
 in 2019, CDP issued a new 750 million euro social bond aimed at funding school building and urban regeneration projects, focussing particularly on safety. The funds raised were used to finance over 3,000 projects, involving about 587,000 students and 130,000 inhabitants, with an estimated impact on employment of over 15,500 full-time jobs created and maintained;
 in 2018, CDP issued its first sustainability bond for 500 million euro, with the proceeds going mainly to finance the construction and modernisation of the country’s water infrastructure. The bond resulted in improving the efficiency of the water system by reducing water loss by an estimated 40 million cubic metres and creating or maintaining over 10,300 full-time jobs. Over 1,200 public entities have benefitted including Municipalities, Mountain Communities, Regions, Provinces, Unions of Municipalities and Environmental Remediation Consortia (about 80% of the recipient municipalities have fewer than 10,000 inhabitants);
 in 2017, CDP was the first National Promotional Institution in Europe to issue a social bond. The proceeds from this 500 million euro bond were used to support the growth of over 2,800 SMEs located in economically disadvantaged or disaster-stricken areas, with an estimated impact on employment of around 17,500 full-time jobs, 6,200 of which were maintained and 11,300 created.

(Associated Medias) – All Rights Are Reserved